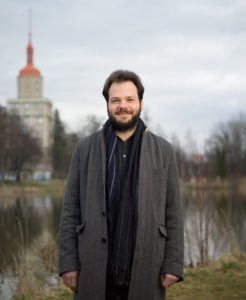 Petr Popelka is JPO’s principal guest conductor since the 2020/2021 season, when he also became the chief conductor of Norwegian Radio Orchestra in Oslo (KORK). In the 2021/2022 season he is going to continue with his previous cooperation and join the Danish National Symphony Orchestra, Bergen Philharmonic Orchestra or the NDR Elbphilharmonie Orchestra again. At home, he will once again perform with JPO, Prague Radio Symphony Orchestra (SOČR) and Prague Symphony Orchestra (FOK). He will also debut as a conductor with the Deutsche Radio Philharmonie, Staatskapelle Weimar, Mozarteum Orchestra Salzburg, Orchestre de Chambre de Lausanne, Sinfonieorchester St. Gallen or Aalborg Symphony Orchestra.

Popelka graduated from Prague Conservatory as a double bass player and then went on studying at a music academy in Freiburg. For nine seasons, he acted as a deputy double bass soloist in the Staatskapelle Dresden. He began conducting in 2016 and only a year later he was awarded the Gstaad Menuhin Festival Academy’s Neeme Järvi Prize for the best young conductor. Petr Popelka is a composer as well. He decided to become a musician at the age of eleven, when he heard Janáček’s cycle of piano pieces On an Overgrown Path.