The symphony orchestra announced Tuesday that it is canceling the rest of its 2020-21 season through June 13, 2021, citing mandatory state and city government health regulations during the pandemic. The symphony closed its doors in March when the pandemic began to surge in New York City.
There will be no live, indoor concerts as the organization had hoped, according to a statement from President and CEO Deborah Borda that cited “deep regret” for the cancellation. 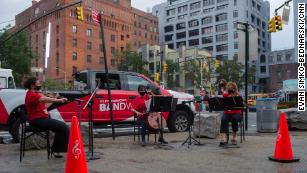 Unable to open its concert hall, New York Philharmonic brings its music to the streets
“In the 178-year history of our institution, the cancellation of an entire season marks a historic first, and a dreadful one at that,” according to the statement. “If you are disappointed, please know how devastated we all are by this turn of events. The health and financial challenges, indeed the experiential challenges we all face, are profound.
“But the Philharmonic didn’t survive and indeed flourish for nearly two centuries by giving up, so we won’t now! We are energetically working to bring you and all New Yorkers live music experiences with NY Phil Bandwagon, which I’m delighted to report will resume by popular demand in the spring.”
The NY Phil Bandwagon is a series of free pop-up concerts at announced locations around New York City.