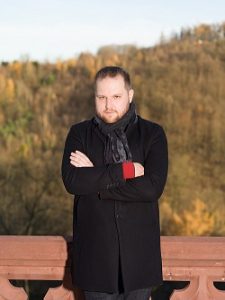 Lukáš Vondráček (1986) held the position of the residential soloist of JPO in the seasons 2020/2021 and 2021/2022. It was preceded by a long-time cooperation with the orchestra, with which he first performed in 1996 when he was ten years old. He returned to his hometown Opava as a performer in 2019 as a part of the subscription concerts.

He began to learn to play the piano under the guidance of his parents when he was two years old. At four, he performed publicly for the first time in Opava, he played pieces of Schumann and Tchaikovsky for children. At eleven, he began his studies at University of Ostrava due to an exception given by its rector. He also studied on the Vienna Conservatory, Katowice academy and he graduated from the New England Conservatory in Boston. At fifteen, Vondráček debuted with the Czech philharmonic orchestra led by Vladimir Ashkenazy, who said about him: “a pianist like this is born once every thirty years”. At sixteen, Vondráček set off on an American tour during which he performed in the Carnegie Hall in New York. He won a number of international competitions and the proof of his exceptional talent can be seen as he won one of the most prestigious competitions worldwide, the Queen Elisabeth Competition in Brussels in 2016. He was the first Czech musician to ever receive the award. Lukáš Vondráček belongs to the most renowned pianists both in Czechia and abroad.