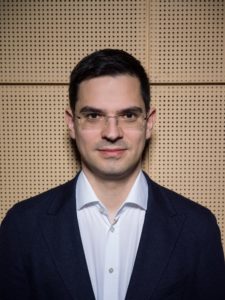 At the Janáček Philharmonic Ostrava we believe that it makes sense to give young talents a chance. This is why we have created the position of assistant chief conductor, which is quite common abroad but still unique in the Czech Republic. It is not only about nurturing the young music scene but also about practical impact. The assistant chief conductor is the link between the orchestra and the conductor. He prepares the orchestra for the conductor’s arrival, and facilitate communication between orchestra members and the conductor. The preparation for the musical performance is improved which is positively reflected in the outcome of the concert itself. After a three-round selection process, the talented Maroš Potokár became the JPO’s first-ever assistant chief conductor, and he convinced us with his calmness, detached view and focus on the studied work.

He has performed as a conductor with various philharmonic orchestras, for example in Brno, Zlín and Olomouc, as well as in Košice, his hometown. In 2017 he made his debut at the National Moravian-Silesian Theatre in Ostrava in the production The Three Musketeers and also at the Slavic National Theatre in Mozart’s Abduction from the Seraglio. As a violinist, he became concertmaster of the State Philharmonic Košice during his studies in 2007, which he still regularly performs as a soloist with.